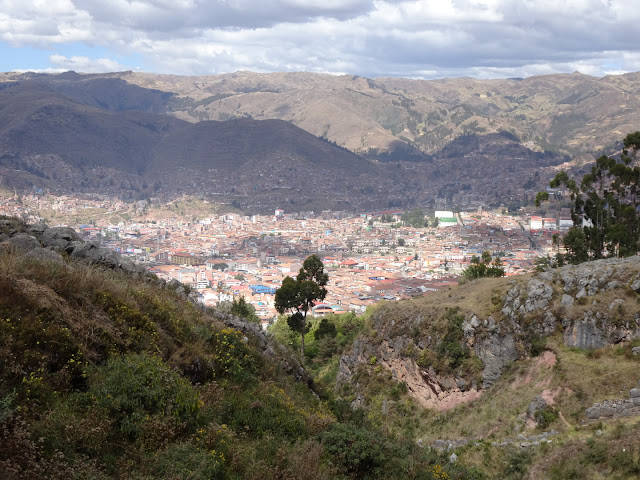 My husband and I just returned from a trip to Peru. This was a bucket-list trip which got us off of North America for the first time and also took us to Machu Picchu.  We were in Peru for 8 days, and while we were there I learned a few things I'd like to share with you.

Having a knowledgeable guide is invaluable.
My brother and his wife have friends in Cusco who own and run a Peruvian travel business, Peruvian Wonders.  My brother shared the contact information for his friends with me and I contacted them via email.  Maria and Raul were very accommodating and friendly.  They sent us two proposed itineraries and we asked some questions and advised of our hopes for the trip.  After this, Maria sent us another itinerary which suited us perfectly - and was very reasonably priced as well!

Maria took us to most of the Incan ruins in and around Cusco. We saw and climbed at Saqsayhuaman, Pisaq, Chinchero, Ollantaytambo, Moray, and the amazing salt ponds of Maras.  She took us to a little place where we could feed the llamas, alpacas, and vicuñas.  She had us stop at a little market where the women shared how they clean, dye, spin, and weave the wool into beautiful sweaters, scarfs, hats, blankets, table runners, etc. We saw the most amazing views of the Andes along the way and Maria was always accommodating in allowing us to stop to take pictures. 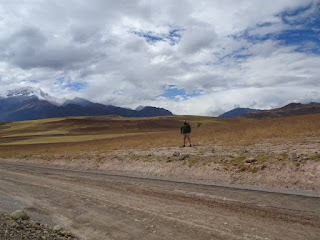 
Maria also made all the arrangements for us to catch the train from Ollantaytambo to Aguas Calientes to see the incomparable Machu Picchu with another English-speaking guide.  We had no worries about how to find our hostel or the bus station because our guide, Ronaldo,  met us at the train station, walked us to the hostel, then picked us up there early the morning we caught the bus to Machu Picchu. He took us on a two-hour tour of the remains of Machu Picchu, after which, my husband and I went back into the park and climbed to the Sun Gate.  Which brings me to my next lesson: 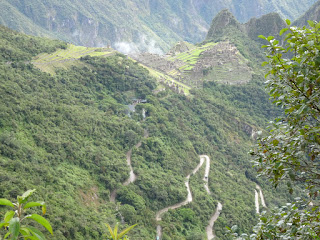 What goes down must come up.
Yeah, yeah. I know the saying is reversed, but when hiking through the mountains it is important to not allow yourself to get too excited about a "down."  Because every down will eventually be followed by a steeper and more impressive up.  That being said, do not allow the ups to keep you from going.  The views are spectacular from on high! 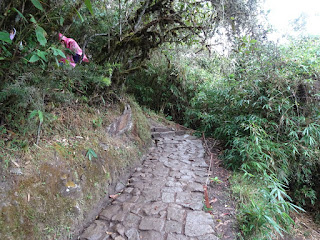 
They don't drive the same as we do in the US.
Maria and Raul had arranged one driver for all our days of touring. Percy took excellent care of us, but we learned early on that sometimes it is better to look anywhere other than straight ahead.  And don't get me wrong, this driving was not limited to Percy, ALL the drivers drove by the same rules (or lack thereof).  It appeared to us that the lines dividing the lanes were merely suggestions. A four-lane road magically has six lanes of traffic! The drivers squeeze in wherever they see an opening *almost* wide enough.  And stop signs?  Stop signs are apparently solely for decorative purposes. Maybe, if we had been there longer, we would have gotten used to looking up to see trucks bearing down on us with inches to spare, however, one week was not enough to time to get used to that!

Kindness and a smile are understood in any language.
Even though I took Spanish classes both in high school and in college, I have managed to forget most of what I had learned.  If the speaker will speak slowly enough I am usually able to pick out enough words to piece together the gist of what they are saying. However, I still lack the vocabulary to answer most of the time.  And my husband speaks and understands even less Spanish than I do!  This made for some interesting interchanges with locals. This really was not an issue until we got to Lima because we had our English-speaking guide with us most of the time we were in Cusco, Machu Picchu, and the surrounding areas.  In Lima, we were on our own.

We were able to show the taxi drivers the address of our AirBnB, but even then they sometimes had difficulty finding it.  On two separate occasions, we found ourselves circling within two blocks of the address only to blurt out, "Aquí! Aquí!" so the taxi driver could let us out and we could walk the rest of the way.  However, no matter the language barrier, we found that as long as we used a smile and a kind tone, we were able to work through most communication issues.  It also doesn't hurt to have a translator app, like SayHi or Google Translate, downloaded to your phone either.

The Pacific can be deceiving.
Just because the name means peaceful, that does not mean the Pacific Ocean is always calm.  And sometimes it will sneak up on you.  During our brief two days in Lima we stayed in Miraflores, which has some beautiful ocean views.  However, the coast there is gravel, not sand. Also, June is the beginning of winter in Peru and it is pretty cool. Even so, I really wanted to just dip my toes in the Pacific Ocean. So, the hubs and I wound our way down and down (and down some more) to the shoreline and I took off one shoe and one sock and held onto to Hubs' hand as I inched my way toward the gently lapping waves.  I would take a little step and the waves would lap, still several inches away, and I would inch some more.  Finally, I inched my way down to the tip of where the waves were lapping, only to have this big wave come up almost to both my knees and well up my husband's calves!  Keep in mind, this was the last thing we did prior to leaving for the airport.  We had to get on the plane with wet shoes.  Well, wet shoe, for me. 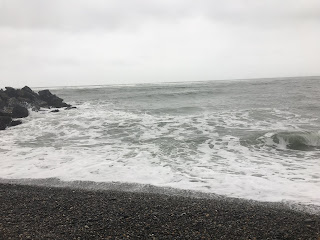 It is possible to be in a foreign country for 8 days and pack only a backpack.
And not one of those crazy-big 70-litre things, either.  I am talking about packing the same backpack I carry back and forth to school every day while I'm teaching - a school backpack.  I packed everything I needed (and a few items I ended up not needing) into my school backpack, and my husband packed his backpack as well.  This gave us the freedom to not have to check any bags and we were able to just walk off the plane and on to our destination. No waiting!  Packing light really made me carefully consider each item I packed. Do I really need to pack makeup? No, I rarely wear it, anyway. How many pairs of underwear and socks should I pack? What is the weather going to be like? Do I need shorts AND a warm jacket? (The answer to this was no, I could have left the shorts at home as it was too cold to wear them, even in Lima). 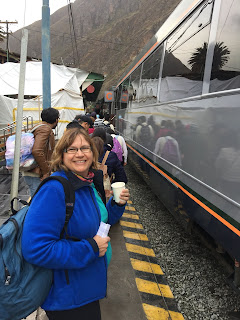 Me with my backpack, boarding the train to Aguas Calientes.
Photo credit: Richard Eccles

Always go.
Admittedly, this is not a lesson I learned while in Peru.  It is, however, a lesson that helped get me to Peru.  At the beginning of this year, my husband and I sat down and made out a list of goals for ourselves.  Some of these goals are personal ones and some of them are for us as a couple. One of those goals was for us to finally get off the continent of North America this year. When given the chance, and it is within your means, go.  So, when Spirit Airlines had a big sale and we were able to score reasonably priced tickets to Lima, we jumped on it.

I have realized that, as I look back over my life the things I regret are those opportunities not taken.  So, when given the chance, I go. When we had a five-hour layover in Fort Lauderdale on the way to Peru, we got ourselves out of the airport and to the beach.  This is not something "normal" people do, apparently.  But why spend five hours cooped up in an airport if you have the chance to spend at least part of that time enjoying lunch on the beach and your toes in the sand? 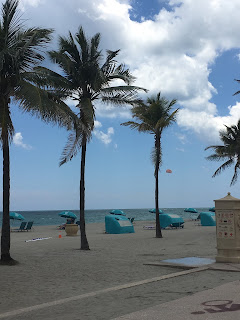 When we were climbing the ruins at Pisaq and they kept going higher, our guide asked us if we wanted to stop, but (thanks to my husband) we kept going. We climbed to the top and were treated to a view we would have missed out on, otherwise. 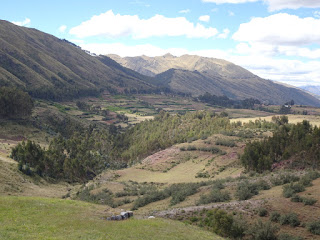 Coming down from the climb at Ollantaytambo, Maria offered us the easy way down.  However, the difficult way down looked a bit challenging, with a path that hugged the side of the mountain and a whole lot of stairs down. When else are we going to get the chance to walk a path carved into the side of a mountain? Like we tend to do in the flow of our lives, we followed the difficult path.  And we do not regret it. 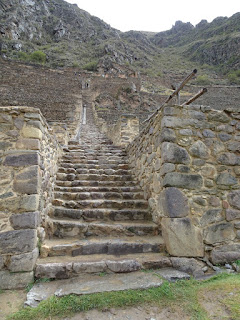 Posted by Teresa Eccles at 7:33 AM